What is the behavior of Conway's game of life when the initial position is random? -- We can ask this question on an infinite grid or on an $n$ by $n$ table (planar or on a torus). Specifically suppose that to start with every cell is alive with probability $p$ and these probabilities are statistically independent. This question was motivated by a recent talk by Béla Bollobás on bootstrap percolation.

Many thanks for all the answers. A related question that I thought about is what is the situation for "noisy" versions of Conway's game of life? For example if in each round a live cell dies with probability $t$ and a dead cell gets life with probability $s$ and both $t$ and $s$ are small numbers and all these probabilities are independent.

Another example is to consider the following probabilistic variant of the rule of the game itself ($t$ is a small real number):

Any live cell with fewer than two live neighbours dies with probability $1−t$.

Any live cell with two or three live neighbours lives with probability $1−t$ on to the next generation.

Any live cell with more than three live neighbours dies with probability $1−t$.

Following some comments below I asked about the computational power of such a noisy version over here.

Update: Related question Is there any superstable configuration in the game of life?

The most rigorous analysis of this that I know of is in:

In order to be able to actually prove something about what happens (in the face of undecidability results for general Life patterns) he considers the case of patterns that are very sparse (each cell initially alive i.i.d. with a very low probability $p$) for relatively short time scales (polynomial in $N=1/p$). Specifically, it looks from my reading that he calculates the asymptotic density of live cells for all times up to $N^{281/96}$, but cannot extend his methods past $N^3$ because somewhere between those two bounds events of unbounded complexity start dominating the density.

The first study of the game of life with random initial conditions that I could find was this paper:

In it they attempt a kind of mean-field analysis (which I haven't digested) as well as do some numerical experiments which suggest that the system approaches a nontrivial asymptotic density for all $0\lt p\lt 1$. 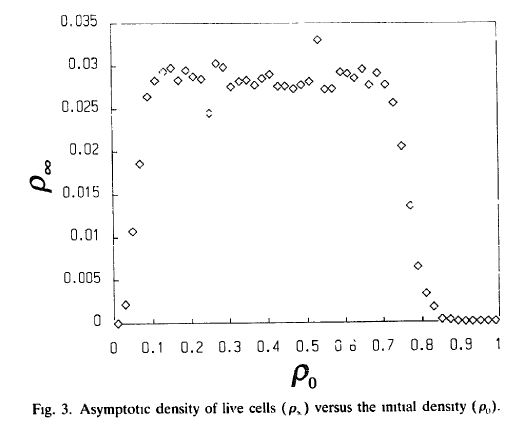 They also investigated the temporal behavior, however I found more detailed simulations and discussion of scaling in this paper:

Here is a plot showing the average number of connected clusters of live sites versus time.

They summarize their findings as follows (below $\varphi$ represents some quantity like the number of live clusters or the total number of live sites, etc.):

For initial occupation probabilities satisfying $0.15\leq p \lt 0.75$, each one of the different statistical functions $\varphi$ describing the dynamics of the GL may be divided in general in three intervals: First, a region extending from $t =0$ to $t\simeq L^{1/2}$ presenting large fluctuations in $\varphi$; second, a scaling region characterized by a power-law dependence between $\varphi$ and $t$, from $t\sim L^{1/2}$ to $t\sim L^{4/3}$ and finally the "steady state" or stabilization region (the SOC [self-organized criticality] state of Bak, Chen, and Creutz [4]) extending from $t\sim L^{4/3}$ to infinite and characterized by small fluctuations of $\varphi$ around some average value $\varphi_0$. These results are obtained from extensive numerical simulations on lattices with different values of L. The critical exponents obtained in the scaling region are robust and do not depend on $p$, for $0.15\leq p \lt0.75$. [...] For low initial occupation ($p\lt 0.15$) or high density occupation ($p \geq 0.75$) the scaling region disappears, and now the domain for large fluctuations of $\varphi$ extends from $t =0$ to $t\sim L^{4/3}$. This region is followed by the "steady state" characterized by small fluctuations around an average value.

I didn't see any rigorous arguments in the papers I found but that doesn't mean there aren't any out there. In particular as Gil hints there is a strong connection to bootstrap percolation, and perhaps some of the theorems proven there apply here as well.

The asymptotic dynamics of the Game of Life from a random starting field is unknown, and profoundly so. Experiments on small fields for small numbers of generations suggest that the asymptotic density is on the order of 1/20 for a wide range of initial probabilities. But these small experiments cannot answer the big questions. Perhaps there exists a high-density starting pattern that fits in a 1000x1000 square, which aggressively takes over the plane with copies of itself. If such a pattern exists, then it will occur with certainty in any random field that is large enough (say 2^(10^8) on a side). If it occurs, it takes over, and the asymptotic density will be much higher than 1/20.

Researchers disagree on whether such a "cancer" is possible (it would have to defend itself against "background radiation" emitted by its environment). The last time I talked to Gosper on this subject, he was convinced that it is possible; if he is right (and one bets against Gosper on such matters with great caution) then the long-term dynamics of the Game of Life is complicated and Darwinian.

I see no reason to expect a different answer to the questions:

(1) "What is the behavior of John Conway's Game of Life when the initial position is random?"

(2) "What is the behavior of Brian Silverman's Brian's Brain when the initial position is random?"

I therefore propose (2) as an alternate to Gil Kalai's question. The complexity of the Brian's Brain's is more visible at human time/space scales and, presumably, computer simulations can be trusted more than for Game of Life.
It would be great if anyone could prove that a random initial position of Brian's Brain on an infinite grid results with almost certainty in a pattern that remains always non-empty as time goes to infinity? I suspect however, that this is a difficult problem.

About the random version, a relevant reference is (IIRC):

(As well as subsequent works.) Essentially given a Turing-complete automaton - not sure about the terminology here - it can be made robust to noise by adding error-correction mechanisms. It is not about GoL, and tastes a bit more like low-temperature Glauber dynamics mixed with directed percolation, but the ideas might be relevant here.

In the probabilistic scenario it seems unlikely that the density will be arbitrary low. As soon as the system would approach this state the would be a lot of empty space with infinitely many small living configurations. Several of these will be in space filling configurations. The small t value should then not be able to prevent a significant growth due to these configurations.

It seems there is an easy solution to the „probabilistic variant of the rule of the game itself”.

If we ask about the situation after the infinite number of steps, the answer is: the system will end up in its absorbing state “all cells dead”.

First observe that in the „probabilistic variant of the rule of the game itself”, the state “all cells dead” is really an absorbing state - no cell has a chance to become live again.

With infinite number of steps, an event with non-zero probability in every step will happen with probability one in some step.

The above is a general idea. To be more precise we should talk about asymptotic density of living cells being zero and not about ending up in a state of “all” cells being dead. Probably, the best way to start the analysis of the infinite grid case is to observe that in any step there’s a non-zero probability of the next state having arbitrarily low density of living cells. For further discussion see the comments below.

Not the answer you're looking for? Browse other questions tagged pr.probability co.combinatorics cellular-automata combinatorial-game-theory or ask your own question.

30
Is there any superstable configuration in the game of life?