Needle probing for a convex body

Q1. What is the fewest number of such needle probe rays that guarantee hitting $K$, as a function of its volume $V$? 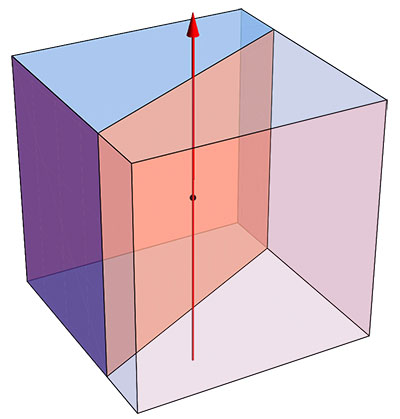 Four parallel rays in a grid pattern do not suffice, but nine do suffice (I believe):

Q3. In $\mathbb{R}^3$, is it sometimes more efficient to use nonparallel rays?

This feels like a classic problem, but I am not finding literature. Thanks for pointers or ideas!

Update 1 (28May13). Here is Yoav Kallus' example showing that dropping the middle of the $9$ points of the grid permits a triangle with area larger than $\frac{1}{4}$ to avoid detection: 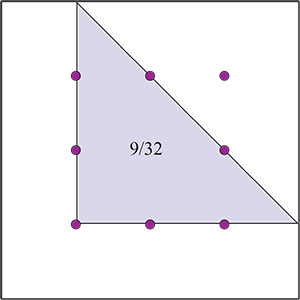 Update 2 (30May13). Q2 and Q3 are now answered by Benjamin Dickman and Douglas Zare: for $V=\frac{1}{4}$, three needles suffice, and more are needed for parallel needles. Q1, in its full generality, is difficult, and so I've added the "open problem" tag.

If $V \gt 1/2$ then there must be some pair of points $(x,y,z)$ and $(-x,-y,-z)$ contained in the region, and the convex hull of these two points contains the origin. This generalizes to show that $3$ needles connecting the centers of opposite faces (the axes) suffice for $V\gt 1/4$:

There is a limit to how much this generalizes, but perhaps the full action of the cubic symmetries will restrict the volumes of regions which avoid the diagonals, too.