Regularity of Delaunay triangulation of a hypercube

First using a three dimensional unit cube as an example for the term "regularity", we can have two possible triangulations: 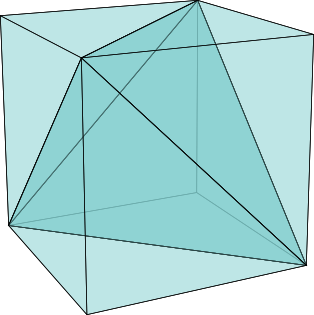 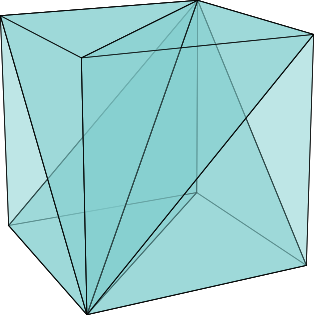 We say the lower triangulation is more "regular" than upper triangulation in that the following ratio for each simplex $K$ varies less among all the simplices: $$ \alpha_K = \frac{\rho_K}{r_K}, \tag{1} $$ where $\rho_K$ is the radius of the inscribed sphere for a simplex $K$, and $r_K$ is the radius of the circumscribed sphere.

A "regular cut" is something like octasection of a tetrahedron by connecting the midpoints of each edge to get $2^3$ similar tetrahedra, just smaller. An "irregular cut" is like following:

in that a simplex is only being divided into 2 smaller simplices. The following figure shows the result of bisecting using the longest edges for all tetrahedra for B(left) and A(right):

For the longest edges varies for triangulation A, to keep the subdivision as a triangulation (no hanging vertices), we need to subdivide more. Needless to say which one is more regular.

When going into four dimensions, things get quite nasty. I am developing an automated mesh generation library for 4-manifold (say we already know that this manifold has piecewise linear structure, and is triangulable), I found that I simply can not afford "regular cut" for the triangulation. I will get $2^4$ smaller 4-simplices from just one 4-simplex, and the computer runs out of memory pretty fast during refining. Hence I could only afford local refinement using "irregular cuts".

Finally my question is: how to triangulate a hypercube resembling (B)? in the sense that, after bisecting the longest edge for a 4-simplex (and its neighboring simplices), the regularity of the mesh does not change too much in terms of the ratio in (1).

Any reference is welcome too.

"Finally my question is: how to triangulate a hypercube resembling (B)?"

This is easy to do, and is normally called the "standard triangulation" of the $n$-cube. Consider all the monotone edge paths from $(0,...,0)$ to $(1,...,1)$ (there are $n!$ of them, corresponding to the $n!$ orderings in which you may decide to increase your coordinates along the monotone path). It turns out that taking as simplices the convex hulls of these paths you get a triangulation in which all the simplices are congruent to one another. In particular, the ratio you are interested in is the same in all simplices.

This triangulation has other many nice properties. To name just one, you can obtain it dissecting the hypercube via the $\binom{n}{2}$ hyperplanes of the form $x_i=x_j$