A learning roadmap for algebraic geometry

Unfortunately this question is relatively general, and also has a lot of sub-questions and branches associated with it; however, I suspect that other students wonder about it and thus hope it may be useful for other people too. I'm interested in learning modern Grothendieck-style algebraic geometry in depth. I have some familiarity with classical varieties, schemes, and sheaf cohomology (via Hartshorne and a fair portion of EGA I) but would like to get into some of the fancy modern things like stacks, étale cohomology, intersection theory, moduli spaces, etc. However, there is a vast amount of material to understand before one gets there, and there seems to be a big jump between each pair of sources. Bourbaki apparently didn't get anywhere near algebraic geometry.

So, does anyone have any suggestions on how to tackle such a broad subject, references to read (including motivation, preferably!), or advice on which order the material should ultimately be learned--including the prerequisites? Is there ultimately an "algebraic geometry sucks" phase for every aspiring algebraic geometer, as Harrison suggested on these forums for pure algebra, that only (enormous) persistence can overcome?

FGA Explained. Articles by a bunch of people, most of them free online. You have Vistoli explaining what a Stack is, with Descent Theory, Nitsure constructing the Hilbert and Quot schemes, with interesting special cases examined by Fantechi and Goettsche, Illusie doing formal geometry and Kleiman talking about the Picard scheme.

And for more on the Hilbert scheme (and Chow varieties, for that matter) I rather like the first chapter of Kollar's "Rational Curves on Algebraic Varieties", though he references a couple of theorems in Mumfords "Curves on Surfaces" to do the construction.

And on the "algebraic geometry sucks" part, I never hit it, but then I've been just grabbing things piecemeal for awhile and not worrying too much about getting a proper, thorough grounding in any bit of technical stuff until I really need it, and when I do anything, I always just fall back to focus on varieties over C to make sure I know what's going on.

EDIT: Forgot to mention, Gelfand, Kapranov, Zelevinsky "Discriminants, resultants and multidimensional determinants" covers a lot of ground, fairly concretely, including Chow varieties and some toric stuff, if I recall right (don't have it in front of me)

Concentrated reading on any given topic—especially one in algebraic geometry, where there is so much technique—is nearly impossible, at least for people with my impatient idiosyncracy. It's much easier to proceed as follows.

An example of a topic that lends itself to this kind of independent study is abelian schemes, where some of the main topics are (with references in parentheses):

You may amuse yourself by working out the first topics above over an arbitrary base. That's enough to keep you at work for a few years!

I need to go at once so I'll just put a link here and add some comments later. Or someone else will. The Stacks Project - nearly 1500 pages of algebraic geometry from categories to stacks.

I'm only an "algebraic geometry enthusiast", so my advice should probably be taken with a grain of salt. With that said, here are some nice things to read once you've mastered Hartshorne.

1) I'm a big fan of Mumford's "Curves on an algebraic surface" as a "second" book in algebraic geometry.

2) Fulton's "Toric Varieties" is also very nice and readable, and will give access to some nice examples (lots of beginners don't seem to know enough explicit examples to work with).

3) More stuff about algebraic curves. The best book here would be "Geometry of Algebraic Curves" by Arbarello, Cornalba, Griffiths, and Harris. The next step would be to learn something about the moduli space of curves. An inspiring choice here would be "Moduli of Curves" by Harris and Morrison.

5) Algebraic groups. I'm a big fan of Springer's book here, though it is written in the language of varieties instead of schemes.

EDIT : I forgot to mention Kollar's book on resolutions of singularities. A masterpiece of exposition!

My advice: spend a lot of time going to seminars (and conferences/workshops, if possible) and reading papers. Talk to people, read blogs, subscribe to the arxiv AG feed, etc. AG is a very large field, so look around and see what's out there in terms of current research. There's a huge variety of stuff. There's a lot of "classical" stuff, and there's also a lot of cool "modern" stuff that relates to physics and to topology (e.g. Gromov-Witten theory, derived algebraic geometry). First find something more specific that you're interested in, and then try to learn the background that's needed.

For me, I think the key was that much of my learning algebraic geometry was aimed at applying it somewhere else. Starting with a problem you know you are interested in and motivated about works very well. For me it was certain bits of geometric representation theory (which is how I ended up learning etale cohomology in the hopes understanding knots better), but for someone else it could be really wanting to understand Gromov-Witten theory, or geometric Langlands, or applications of cohomology in number theory.

For a small sample of topics (concrete descent, group schemes, algebraic spaces and bunch of other odd ones) somewhere in between SGA and EGA (in both style and subject), I definitely found the book 'Néron Models' by Bosch, Lütkebohmert and Raynaud a nice read, with lots and lots of references too.

I found that this article "Stacks for everybody" was a fun read (look at the title!), and provided motivation through the example of vector bundles on a space, though it doesn't go that deep: http://www.cgtp.duke.edu/~drm/PCMI2001/fantechi-stacks.pdf

As for things like étale cohomology, the advice I have seen is that it is best to treat things like that as a black box (like the Lefschetz fixed point theorem and the various comparison theorems) and to learn the foundations later since otherwise one could really spend way too long on details and never get a sense of what the point is. I have certainly become a big fan of this style of learning since it can get really boring reading hundreds of pages of technical proofs.

If you want to learn stacks, its important to read Knutson's algebraic spaces first (and later Laumon and Moret-Baily's Champs Algebriques). To keep yourself motivated, also read something more concrete like Harris and Morrison's Moduli of curves and try to translate everything into the languate of stacks (e.g. as you're learning stacks work out what happens for moduli of curves). There are a lot of cool application of algebraic spaces too, like Artin's contraction theorem or the theory of Moishezon spaces, that you can learn along the way (Knutson's book mentions a bunch of applications but doesn't pursue them, mostly sticks to EGA style theorems). Another nice thing about learning about Algebraic spaces is that it teaches you to think functorially and forces you to learn about quotients and equivalence relations (and topologies, and flatness/etaleness, etc).

Douglas Ulmer recommends: "For an introduction to schemes from many points of view, in particular that of number theory, the best reference by far is a long typescript by Mumford and Lang which was meant to be a successor to “The Red Book” (Springer Lecture Notes 1358) but which was never finished. These notes have excellent discussions of arithmetic schemes, Galois theory of schemes, the various flavors of Frobenius, flatness, various issues of inseparability and imperfection, as well as a very down to earth introduction to coherent cohomology. Some of this material was adapted by Eisenbud and Harris, including a nice discussion of the functor of points and moduli, but there is much more in the Mumford-Lang notes." Unfortunately I saw no scan on the web.

Underlying étale-ish things is a pretty vast generalization of Galois theory. Hendrik Lenstra has some nice notes on the Galois Theory of Schemes ( websites.math.leidenuniv.nl/algebra/GSchemes.pdf ), which is a good place to find some of this material.

There are a few great pieces of exposition by Dieudonné that I really like. The first two together form an introduction to (or survey of) Grothendieck's EGA. The second is more of a historical survey of the long road leading up to the theory of schemes. I am sure all of these are available online, but maybe not so easy to find.

The following seems very relevant to the OP from a historical point of view: a pre-Tohoku roadmap to algebraic topology, presenting itself as a "How to" for "most people", written by someone who thought deeply about classical mathematics as a whole. The source is

However, I feel it is necessary to precede the reproduction I give below of this 'roadmap' with a modern, cautionary remark, taken literally from http://math.stanford.edu/~conrad/: 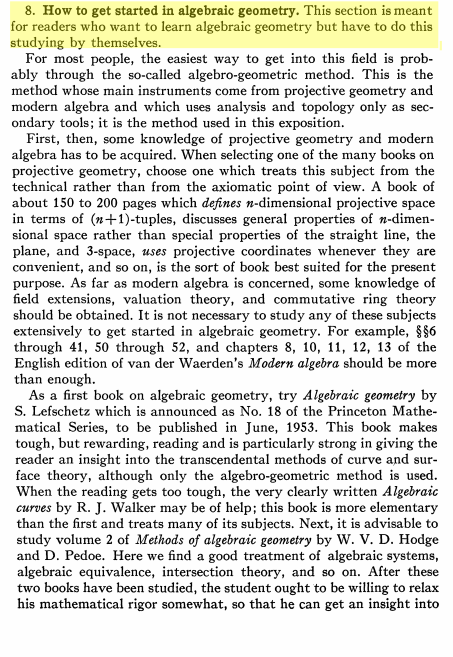 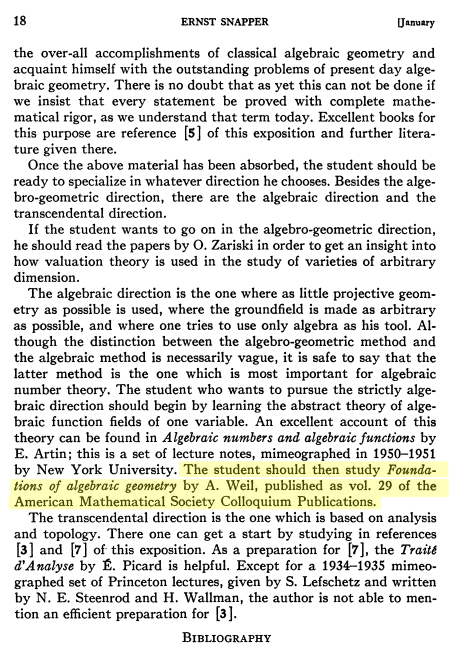 It is interesting, and indicative of how much knowledge is required in algebraic geometry, that Snapper recommends Weil's 'Foundations' at the end of this "How to get started"-section.

Though there are already many wonderful answers already, there is wonderful advice of Matthew Emerton on how to approach Arithmetic Algebraic Geometry on a blog post of Terence Tao. This has been wonderfully typeset by Daniel Miller at Cornell.