Random rings linked into one component?

Let $S$ be a sphere of unit radius. Let $C_n$ be a collection of unit-radius circles/rings whose centers are (uniformly distributed) random points in $S$, and which are oriented (tilted) randomly (again, uniformly).

Q1. As $n \to \infty$, does the probability that all the rings in $C_n$ are linked together in one component approach $1$?

By "linked together" I mean that if you pick up any one ring, all the others are physically connected and would follow. For example, below there are $n=5$ rings, four of which are connected, but one (topmost) is not: 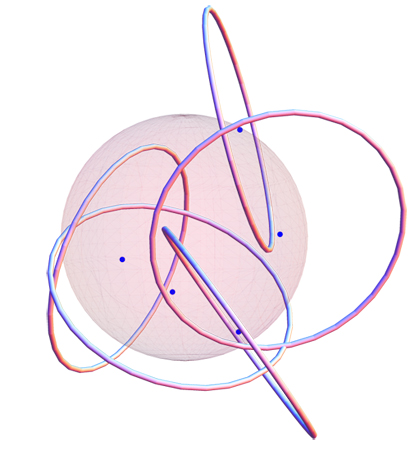 I feel the answer to Q1 should be Yes, but I am less certain of Q3. Exact computation of probabilities as a function of $n$ might be difficult, but I am hoping there are relatively simple arguments to settle these questions. Thanks for ideas!

Answered (1May13). The combination of Ori Gurel-Gurevich's and Benoît Kloeckner's postings constitute a rather complete answer, establishing that the answer to all my questions is Yes, even without the assumption that $S$ is convex. Thanks for the interest!

I think I can complement the answer of Ori Gurel-Gurevich to prove that indeed, when we deal with connected open sets (no need for convexity) the answer is positive.

1. There is a finite configuration of circles $C_1, \dots, C_N$ whose centers are in the domain $D$, such that any circle $C$ with center in the domain $D$ must be linked to at least one of the $C_i$.

One way to do this is to first take a very tight lattice $\Lambda$, and put horizontal circles $C_1,\dots, C_K$ with centers on $\Lambda\cap D$. Now, a circle with center in $D$ that is not linked to any of these $C_i$ ($i\leq K$) must be roughly horizontal.

Then, add circles $C_{K+1},\dots, C_N$ with center on the lattice but oriented along a given vertical plane. A circle not linked to any $C_i$ must be roughly horizontal and roughly vertical, thus don't exist.

2. The above construction is stable under small perturbation. This means that there are small open sets $U_1,\dots, U_N$ of the parameter space such that for all set of circles $C_1,\dots, C_N, C$ such that $C_i\in U_i$, $C$ must be linked to one of the $C_i$.

3. By adding more circles that link together the $C_i$ of 1., we could have assumed that the $C_i$ make a linked component (this is where we use the connectedness assumption on $D$, which in fact could be weakened). As in 2., this is stable under small perturbation, so in fact there are small open sets $U_1,\dots, U_N$ of the parameter space such that for all set of circles $C_1,\dots, C_N, C$ such that $C_i\in U_i$, the $N+1$ circles must be linked together.

4. Now, when $n\to \infty$ the probability that circles have been drawn in each of the $U_i$ increase to $1$ exponentially fast, so at some point our random configuration contains with high probability a set of circles that links all admissible circles, including all the other randomly drawn ones.

I believe the answer should be positive for any bounded connected body, but I cannot show this yet. However, I have a reduction of the question to the case where the body is small.

The idea is to partition the body into smaller bodies, say by taking the intersections of the cubic lattice of side length $1/10$ with the body. Then we define a "good event" in every cube saying that there are 3 rings in that cube that are roughly in the directions of the 3 axis. Then, with high probability all the cubes will be good. Now, every 2 adjacent good cubes are necessarily linked (we may have to make the good event have more then just these 3 rings for it to work). Thus, we have a "giant linked component".

Now, it remains to show that if the body is small (relative to the rings) with high probability all the rings are linked. It seems that one needs to analyze the probability that the "extremal rings" are roughly orthogonal to the cluster of centers, but I don't know exactly how to do that.

Not the answer you're looking for? Browse other questions tagged pr.probability mg.metric-geometry knot-theory knot-link or ask your own question.

7
Shortest paths on linked tori
11
Number of the Reidemeister moves needed to transform one diagram into another one
14
Optimal wireframe sphere
1
Cancellation of 2-component links
20
Is the circle in the square best at avoiding random lines?
10
Tangled random triangles: One giant component?
5
Non-zero winding number on a space curve implies a linked curve in the zero set?
Question feed