Definition of a uniformly bounded dual of a group

The unitary dual of a group $G$ is the set of equivalence classes of irreducible unitary representations of $G$ with the Fell topology. (This topology is defined using convergence of positive definite functions, or equivalently, diagonal matrix coefficients, associated to the representations).

Such a uniformly bounded dual is mentioned a few times in the literature, but usually vaguely defined to be "analogous to the unitary dual". In particular, there is hardly any explicit statement about what topology is used.

I am interested in this since I would like to understand a series of results of M. Cowling from the early 1980s on a stronger version of Kazhdan's property (T). Cowling proved that for a simple Lie group $\Gamma$, the trivial representation is isolated in such a uniformly bounded dual if and only if the rank of $\Gamma$ is $\ge 2$.

In the case of $Sp(n,1)$ Cowling constructs an explicit family of uniformly bounded representations that approximate the trivial representation. The best description of his construction I have found is in his abstract from an Oberwolfach workshop from 2001 on the geometrization of property (T) (see MFO report, the following abstract is on page 3): 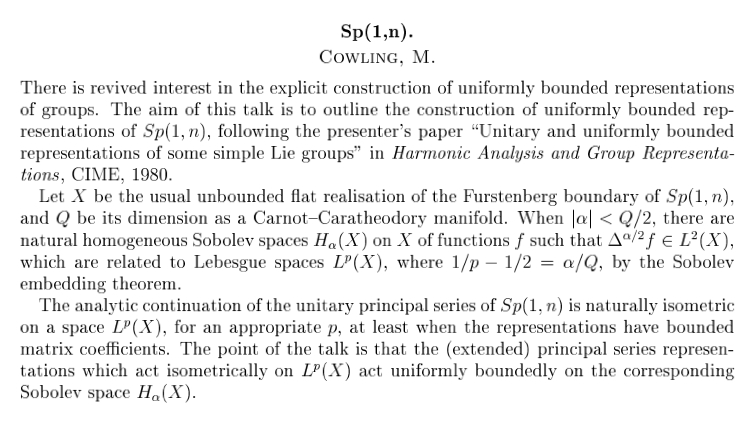