I am wondering what the corresponding value would be for the unit plane? I am not a mathematician, but my intuition suggests the answer is simply 1/(N -1), given N points on a unit square (plane).

Here are two crude estimates for $p_n(x)$. If we have drawn $k$ points, the probability that the next is within $x$ of one of the points is at most $k \pi x^2$, and at least $k \frac{\pi}4 (\frac{x}2)^2 = k \pi x^2/16$. The latter comes from putting a disk of radius $x/2$ at each of the previous points. These disks can't overlap, and at least a quarter of each disk is inside the square. We could improve this significantly on a torus.

So, these crude upper and lower bounds only differ by a factor of $4$, and for large $n$, $1/n$ might be about right.

The OP's intuition goes awry in the very first case, $N=2$, where it predicts an expected distance of 1. As I'll show below, the expected distance between two points in the unit square is less than 1, so whatever the actual answer is in general, it's not as simple as $1/(N-1)$.

The smartest way to show that the expected distance between two points is less than 1 is, I suppose, to explicitly compute it, calculating

The second smartest way, I imagine, would be to write a computer program that picks random points $P$ and $Q$ and keeps a running average of their distance apart until you feel confident in the approximation.

I decided to try the third (or maybe fourth or fifth or....) smartest way: Show that the expected distance is less than something that's less than 1, using the crudest upper bounds that work. I'll describe this in a somewhat prolix fashion, following my initial line of thought to a dead end, and then modifying it to get to the cheese. My real goal was to (dis)prove the result with as little hard work as possible, but I wound up spending an awful lot of time on it (mostly correcting mistakes).

It'll be helpful to draw the diamond connecting the midpoints of the sides of the Unit square, and refer to a point $(x,y)$ as being inner or outer depending on whether it's inside or outside the diamond, i.e. whether $|x|+|y|$ is less than or greater than 1. (You can assign the points with $|x|+|y|=1$ however you like, or ignore them altogether.)

Any two points are either in the Same quadrant, Adjacent quadrants, or polar Opposite quadrants, with probability $1/4$, $1/2$, and $1/4$ if the points are chosen at random. This gives

where $S$, $A$, and $O$ are the expected distances in the three disjoint cases (ignoring the measure-0 overlaps). In each case, the two points will either both be inner, both be outer, or will be one of each, with corresponding probability $1/4$, $1/4$, and $1/2$. Let's look at the three cases in reverse order.

Finally (modulo a refinement to come), in case $S$, the distance between two points, whether inner or outer, is at most $\sqrt2$, i.e.,

Putting all this together gives

The problem is, this simplifies to

which doesn't prove what we want. But there's a clever way out. That's to realize that case $S$ is simply the original problem, on the "unit" as opposed to "Unit" square. So instead of replacing $S$ with a crude upper bound, let's use

This time, the crude upper bounds for $A$ and $O$ lead to

which is all we want.

If anyone can think of another way to show that $E<2$, please post it!

This is a continuation to Douglas Zare's answer. I believe his lower bound of $1/n\sqrt{2}$ is the correct asymptotic behaviour. To see that, notice that all in inequalities in the calculation of the lower bound tend to equalities as $n\to \infty$, with the possible exception of the first inequality.

But in fact, the first inequality also tend to an equality when $n\to \infty$. This is because the error term is the measure of the overlap between discs of radius $x$ around the $k$ points and for $x=O(1/n)$, which is the relevant order of magnitude, this overlap is negligible - it's $O(k^2/n^4)$ whereas the measure of the discs is $\Theta(k/n^2)$.

Some empirical data, with each point the average of 50 trials: 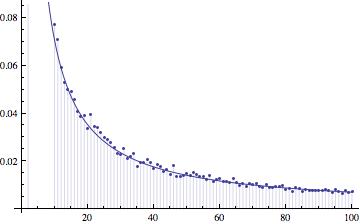 Not the answer you're looking for? Browse other questions tagged co.combinatorics pr.probability or ask your own question.