Given 4 points $A$, $B$, $C$ and $D$ in general position in the euclidean plane, is it possible to determine from the 6 distances $AB$, $BC$, $CD$, $AD$, $AC$ and, $BD$ alone, whether every point is a corner of their convex hull under the restriction that comparing sums and/or differences of the distances is the only allowed operation and that no information about the point's coordinates is available.

Background of the question is whether it is possible to generalize the concept of intersection to non-adjacent edges of a general weighted graph. If the answer were affirmative, then geometric concepts like inside/outside relations or convex hulls would be an "intrinsic" property of graphs; triangulations of complete graphs would then also be more flexible and could contain complete subgraphs of order 4.

Here is a sketch of an answer that involves the squared Euclidean distances between the four points $A,B,C,D$ (and only the squared ones, not a mixture between squared and non-squared distances.)

No. (This was an answer to a previous, not entirely clear version of the problem.) Take an equilateral triangle ABC of side length 1, plus the midpoint D of the side AC. By pushing D slightly in or out parallel to the line BC, you can make ABCD nonconvex or convex. BD is the only irrational distance among the 6 distances. By taking the perturbation sufficiently small (say $\pm0.01$), you cannot distinguish from sums and differences whether BD is larger or smaller than in the original (degenerate) position. 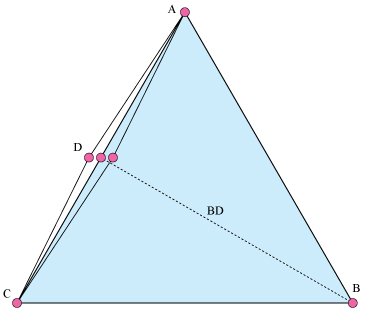 @epsilontik, I assume that you mean that just 6 positive reals are given (corresponding to the distances between certain 4 points of the Euclidean plane.

The answer is NO--such data cannot determine the convexity because the same 6 positive reals can stand for two completely different 4-point sets, where in one case none of the points belongs to the convex hall of the remaning three, while in the other case one will. After connecting these points, in each case separately, by straight intervals, the (non-intersecting) diagonals in the non-convex case will have lengths equal to the lengths of two of the sides in the other case.

I thought I see an example by continuously deforming one configuration into another, with an intermediate one giving a solution. Now I don't see it anymore, and even have serious doubts about it, sorry. (Please, remove the undeserved by me vote for my premature answer :-)). Sorry. (I'll patiently use paper and pen next time, for verification, before rushing my happy announcement).

As nicely shown above, If we merely have a set of six distances the answer is no. Rearranging that example we see that it remains no even if we are given that the points all have integer coordinates and we know the individual lengths $AB,AC,BC,AD$ but we have the two values $BC,BD$ without knowing which is which.

Given the six lengths and the full ability to do geometric constructions or algebra we can locate $D.$ Knowing $AB,AC,BC$ along with $BD$ and $CD$ limits $D$ to one of two locations which are not equally distant from $A$. Sometime the answer would be obvious such as $AD=BD=CD$ and $AB=AC=BC.$ I think that if we could go off and do calculations we could come back and know what additions and comparisons to do to answer the question. However a simple algorithm seems unlikely to me because it could depend on very minute differences.

One sufficient condition for convexity is, that the edges of the maximum-weight perfect matching are the two edges of maximal weight.

Not the answer you're looking for? Browse other questions tagged graph-theory mg.metric-geometry convexity triangulations or ask your own question.

68
Which graphs are Cayley graphs?
3
Geodesics in Graphs:Shortest Paths vs Going as Straight Ahead as Possible
7
Analysis of the Laplacian of a random bipartite graph
10
Sums of squared distances between points on an $n$-sphere
7
2D closed convex shape which minimizes average distance between points
Question feed