Polyhedra that combinatorially shadow a sequence

Let $P$ be a polyhedron in $\mathbb{R}^3$. Say that $P$ combinatorially shadows a sequence of natural numbers $S$ if there is a continuous rotation of $P$ such that its orthogonal-projection shadows are polygons whose number of sides coincide with the elements of $S$ in order. For example, $S$ might be the odd primes: $S=(3,5,7,11,13,\ldots)$, and we want the shadows to be a triangle, then a pentagon, then a septagon, then a hendecagon, etc.

Q0. Let $S$ be an increasing sequence of natural numbers, whose first element is $\ge 3$. Does there exist a polyhedron $P$ that combinatorially shadows $S$?

I think the answer here is Yes, illustrated just for $S=(3,5)$ with this example: 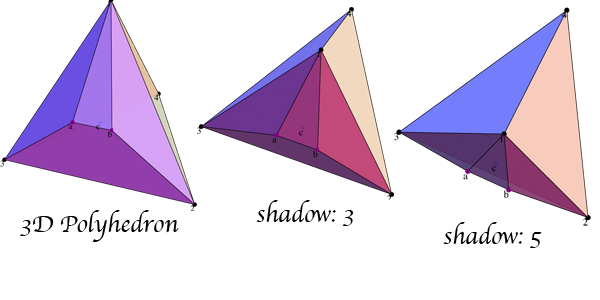 The generalization is that the needed increase above the previous element in the sequence is achieved by bumping out near the centroid of an appropriate face (the centroid $c$ of face $(1,2,3)$ in the above example is bumped out to $\lbrace a, b \rbrace$), shallow enough to be hidden for the previous element (middle image), but sufficent so that a rotation will simultaneously expose the additional vertices (right image). So if I am correct here, there is a prime polyhedron that realizes the odd primes—either up to any given prime, or all odd primes if an infinite number of faces are countenanced.

Correction (9Dec12): I now think the above sketch fails to allow many vertices to appear in the shadow simultaneously. Better is to split existing vertices into two ... [remaining bad idea deleted]. 23Dec12: Now I believe the construction posted in a separate answer settles Q0 (positively).

Q1. Let $S$ be an arbitrary sequence of natural numbers, each $\ge 3$. Does there exist a polyhedron $P$ that combinatorially shadows $S$?

Ideas, even half-baked, or pointers to relevant literature welcomed! Thanks!

This answers my Q0. The polyhedron is the convex hull of these faces: 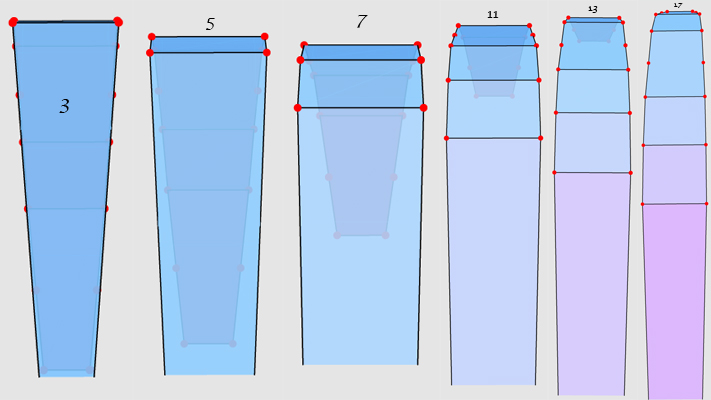 Clearly the same design (not dissimilar from Gerhard's suggestion) suffices to capture any sequence with $s_{i+1}-s_i \ge 2$. This suffices for a prime polyhedron, my original (recreational) goal.

It is not difficult to capture sequences that also sometimes increase by just $1$, by arranging for rotation to expose a (thin) triangle face. Thus the answer to Q0 is Yes.

Not the answer you're looking for? Browse other questions tagged mg.metric-geometry discrete-geometry polyhedra or ask your own question.

9
What is determined by the combinatorics of the shadows of a convex polyhedron?
9
Regular polygon shadows of convex polyhedra
3
Grading a non-graded poset as squeezed as possible
18
"Derived" polyhedra and polytopes
38
Can we find lattice polyhedra with faces of area 1,2,3,...?
26
What's that shape? Inferring a 3D shape from random shadows
9
Labeling edges of an icosahedron with sum constraints
Question feed