Proof without words for surface area of a sphere [closed]

Want to improve this question? Update the question so it's on-topic for MathOverflow.

I love the book Proofs Without Words by Roger B. Nelsen. One of the proofs I liked the most was this: Area under one arch of a cycloid is 3 times the area of the wheel that traces it. You break the cycloid in to three parts and show that each part has an area equal to that of the wheel.

I have always wondered if there is a similar proof for why the surface area of a sphere is equal to the area of a circle with radius twice that of the sphere. Is there a nice way to see this?

I would also like to know if one can show without doing any calculus that the length of the arch of the cycloid is 8 times the radius of the wheel. (Note: $\pi$ does not show up here, so this sounds tricky!)

It seems that you are more or less asking for a proof-without-words of Archimedes's theorem equating the area on a sphere between two horizontal slices with the area of the circumscribed cylinder between the same two slices. But this is a notoriously non-obvious theorem, so I'll be very surprised if such a proof exists.

Here's why I say that proving the $4\pi r^2$ formula is more or less the same as proving Archimedes's theorem: The theorem is clearly approximately true for a very thin slice symmetric around the equator. As you move from the equator to a pole, taking slices of equal width, it would be at least mildly suprising if the corresponding spherical surface areas did not change monotonically. If they decrease, then the total area of the sphere is less than that of the cylinder; if they increase, then the total area of the sphere is more than that of the cylinder. So (at least given the expectation of monotonicity), having them all equal (i.e. the full strength of Archimedes's theorm) is equivalent to the sphere having the same surface areas as the cylinder, which in turn is clearly $4\pi r^2$. 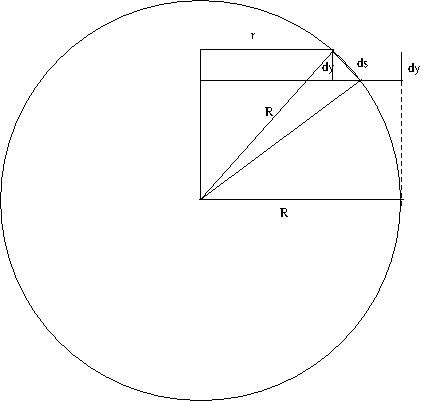 I will describe in words a proof which might as well be illustrated without words (I would provide it in such visual form instead had I only the skills to make diagrams any nicer than MS Paint scrawls):

Imagine a sphere as the Earth, oriented in the usual way with the North pole on top. [This makes no difference except to my linguistic convenience, of course]

Consider an infinitesimal "square" patch of the Earth's surface, whose sides are oriented along lattitudinal and longitudinal lines, and the distortion this square undergoes when projected horizontally outward to the cylinder circumscribing the Earth (with the polar axis as its axis).

Thus, our cylindrical projection is area-preserving, from which we have that the area of the entire sphere is the same as the side area of its circumscribing cylinder.

This, it seems to me, is a perfectly "directly geometric" account of the desired fact.

Not the answer you're looking for? Browse other questions tagged ca.classical-analysis-and-odes integration curves-and-surfaces geometric-intuition slick-proof or ask your own question.