Does every set of $n$ points in the Euclidean plane contain three points $A,B,C$ such that the two segments obtained by joining $A,B$, respectively $A,C$ form an angle at least equal to $(1-2/n)\pi$ at the point $A$? (Equality is of course achieved by the vertex set of a regular $n-$gone.)

Pietro Majer's example below can be generalized and shows that $(1-2/n)\pi$ has to be replaced by a somewhat smaller constant (at least for values of $n$ which are large enough). For his example we have to take $(1-2/6)\pi$ instead of $(1-2/7)\pi$. Is the best possible constant $(1-a(n))\pi$ asymptotically substantially better, ie. can $na(n)$ become for example arbitrarily large for $n$ large enough? (It is of course obvious that $a(n)$ is decreasing but how fast?)

Update: For $n=5$, one can get arbitrarily close to $(1-1/4)\pi$: Take a right-angled isocele triangle. Split the right-angled-vertex infinitesimally along a line parallel to the longest side of the initial triangle and add an additional point on the symmetry axis very high above the two infinitesimal points.

The above is an excerpt from this paper: 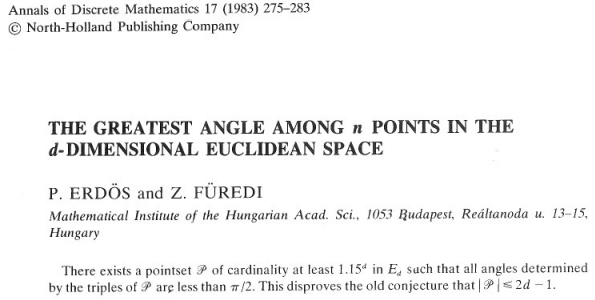 2
Is ellipse on a sphere convex? (proof)
43
two tetrahedra in R^4
17
Partitions of $\mathbb{R}^d$ by implicit polynomial equations
1
Examples on small cut radius of totally convex set in non-negatively curved manifold
9
Separating points in the plane II
9
Diameter of random segment intersection graph?
5
To find the Largest Regular n-gon contained in a given convex region
8
'Fattest' polygons based on diameter and 'least width'
Question feed