Has any attempt been made to classify finite groupoids?

I recently stumbled upon the Mathieu groupoid and I found them fascinating.

It appears as a subset of $S_{13}$ which is not closed under multiplication, but it turns out to be a groupoid with 13 objects. The "first" sporadic finite simple group $M_{12}$ appear as the Automorphism of a point. One can further find $M_{11}$ from this.

Now that people classified finite simple groups with decades of effort, I'm wondering if there has been any attempt to classify finite groupoids.

(Maybe some results like this is already implied by the classification of finite simple groups, but the groupoid $M_{13}$ seems so amazing, so I got curious.)

Asking to classify finite groups in general is essentially a pie in the sky question. We know that every finite group is 'built up' of finite simple groups, but even with those classified there are still many different ways a given set of groups can be combined to produce new ones. Worse still, enumeration of finite groups seems to suggest what one would intuitively expect to be true: the ones with less structure can be glued together in far more ways than those with rich and complicated structure.

More explicitly, groups of order at most 2000 or so have been classified (see for instance this ten year old paper of Besche, Eick and O'Brien:

So for example, I claim that a finite connected groupoid $G$ is classified by the cardinality of its object set $G_0$ together with the isomorphism type of a typical automorphism group $G(x, x)$. In other words, if $G$, $H$ are finite connected groupoids $G$, $H$ and there exists a bijection $F_0: G_0 \to H_0$ between their objects sets and a group isomorphism $\phi: G(x, x) \to H(y, y)$ between typical automorphism groups (supposing WLOG that $y = F_0(x)$), then $G$ and $H$ are isomorphic as groupoids.

@Fernando: @Todd: I'd just like to add to Todd's remark on the classification of groupoids up to isomorphism. It was early realised that any groupoids is the disjoint union of its connected components; and that given any $cx \in Ob(G)$ for a connected groupoid $G$ ithen $G$ s isomorphic to $G(x) * T$ where $G(x)$ is the vertex, or object group, at $x$ and $T$ is a "tree groupoid", i.e. $T(y,z)$ is a singleton for all $y,z \in Ob(G)$. However this determination depends on first choosing the object $x$ and then for each $ y \ne x$ in $Ob(G)$, choosing an element in $G(x,y)$. So there are lots of choices. As Fernando remarks, a single connected groupoid is up to homotopy "the same as" a group.

However the relation of groupoids to other areas of mathematics is interesting. 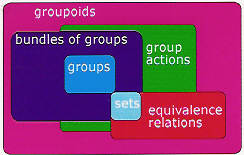 Now what the objects of a groupoid add to a group is a kind of "spatial" character. This allows between different groupoids all sorts of new possible interactions, quite unlike those of groups. This is especially relevant to van Kampen type situations. Further, the choices involved in the above determination imply that the classification of diagrams of groupoids does not reduce to the classification of diagrams of groups.

Further, morphisms of groupoids have much more variety than do those for groups: for groupoids we have equivalences, fibrations, covering morphisms (related to actions on sets), quotient morphisms (factor by a normal subgroupoid), universal morphisms (identify objects in some way), orbit morphisms, .... So it is often in the relations between groupoids rather than the classification of single groupoids that we should see the benefit of their use. This reflects the categorical viewpoint.

Groupoids internal to a given category are of much interest, partly because groupoids generalise equivalence relations, and so the idea of quotienting.

A discussion on mathoverflow on many base points seems relevant.

2 May, 2020 I had in the 1980's a discussion on the subject of "groupoids reduce to groups" with Alex Heller. He argued that "classification up to isomorphism" is not always the only worthwhile objective. After all classification of finite dimensional complex vector spaces is well known; but linear algebra remains in the syllabus! Further, classification of such vector spaces with an endomorphism is interesting (normal forms!), classification with two endomorphisms is hard, and with three is unknown. In the case of groupoids, maybe the problem is to formulate the interesting questions! One also needs to look at examples, perhaps such as Conway groupoids (cf Wikipedia, for example), and to study the history. My own interest was partly in the fact that a natural formulation of "higher dimensional group" yielded just "abelian groups" (Eckmann-Hilton, cf homotopy groups), while even "2-dimensional groupoids" are intriguingly complicated. What should one make of that?

There are various reasons it's undesirable to make such choices, with maybe the most practical one being that they are often unavailable once you introduce extra structure. For example, given a group $G$ you might want to study groupoids equipped with a $G$-action. These are strictly more interesting than disjoint unions of groups equipped with a $G$-action, and the reason is precisely that a $G$-groupoid need not have any $G$-invariant basepoints.

This is in fact an issue in the present example:

Another example of this phenomenon is the following: the configuration space $\text{Conf}_k(\mathbb{R}^2)$ of $k$ ordered points in the plane is naturally an Eilenberg-MacLane space $K(P_k, 1)$, where $P_k$ is the pure braid group. On the other hand, $\text{Conf}_k(\mathbb{R}^2)$ clearly has an action of $S_k$ on it given by permuting points. This action does not fix any basepoints, and so it does not induce an action on $P_k$.

It does induce an action on a groupoid equivalent to $P_k$ with $k!$ points given by taking the fundamental groupoid of $\text{Conf}_k(\mathbb{R}^2)$ at a set of basepoints which are setwise fixed under the action of $S_k$. A more complicated choice of basepoints setwise fixed under the action of $S_k$ can be used to give a model of the little disks operad as an operad in groupoids. This operad cannot be simplified to an operad in groups, despite the fact that all of the groupoids involved are connected, precisely because of basepoint issues (the basepoints must be chosen not only compatibly with the $S_k$-actions but with operadic composition).

Edit: One way to measure the interestingness of the $S_k$ action on $\text{Conf}_k(\mathbb{R}^2)$ is that it does not even fix a basepoint in the homotopy coherent sense: equivalently, there is a corresponding short exact sequence

Todd Trimble basically answered the question you literally asked, but it sounds like you may be thinking about a slightly different question, e.g., is there a classification of objects like the Mathieu groupoid, where it may show up as an exceptional example?

That said, it seems unlikely that anyone has made a concerted attempt, even on the level of Hölder's 2-step program, due to a lack of structure.

Not the answer you're looking for? Browse other questions tagged co.combinatorics finite-groups groupoids or ask your own question.

71
Compelling evidence that two basepoints are better than one
17
What's the big deal about $M_{13}$?