Q1. Are there convex polytopes combinatorially equivalent to each of the regular polytopes that are realized with integer vertex coordinates? 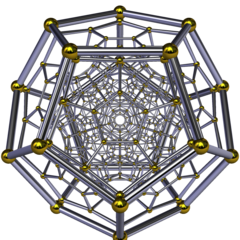 There are six regular polytopes in $\mathbb{R}^4$ (above is the 120-cell) and three in higher dimensions.

Q2. Are the realization spaces of convex polytopes combinatorially equivalent to each of the regular polytopes open balls topologically?

The answer to both of these questions is Yes in $\mathbb{R}^3$, but without the regularity stipulation, the answers are No already in four dimensions: there are polytopes only realizable with irrational coordinates, and polytopes with (highly) disconnected realization spaces. See Jürgen Richter-Gebert, Günter M. Ziegler, "Realization spaces of 4-polytopes are universal." Bulletin of the AMS, Volume 32, Number 4, October 1995, Pages 403-412. arXiv link.

I believe the answer to Q1 is Yes, but I am much less certain of Q2. Perhaps those familiar with Richter-Gebert's proof technique and the surrounding literature (e.g., Mnev’s Universality Theorem) can see through this easily. I'd appreciate help—Thanks!

Update. Q1 has been answered positively by Igor Pak. But to show this is not obvious, it is apparently open whether the "first truncation" of the 600-cell is rational: Günter Ziegler, "Non-rational configurations, polytopes, and surfaces," arXiv link. On Q2, a colleague pointed me to a theorem that appears on p.92 in Grünbaum's Convex Polytopes book, which I cannot access at the moment. But Ziegler quotes a theorem from Grünbaum that proves that the realization space of any convex polytope is a semialgebraic set. Which of course does not resolve Q2. 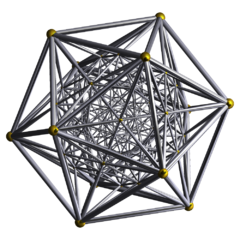 Answering asymptotically 1/3 of the question: the realization space of the simplex is contractible: when parametrized by the squares of the lengths, the space of simplices is a convex cone (a linear transformation of the PSD cone). This, together with some related results, is discussed in this old preprint.

Not the answer you're looking for? Browse other questions tagged convex-polytopes geometry combinatorial-geometry or ask your own question.

15
Are the Platonic solids shadows of 4-polytopes?
48
How many ways can you inscribe five 24-cells in a 600-cell, hitting all its vertices?
6
How rich is the class of vertex- and edge-transitive polytopes?
4
4-polytopes with only one kind of regular facet
10
What is the convex hull of the quaternionic symmetries of the 3 dimensional cube?
Question feed