My question is the following: Say we allow the anchor points, which the "B" ends of the springs are connected to, to take independent two-dimensional random walks, each with $T$ steps and step-size of $D$. Or, if it simplifies things, imagine that we simply add a set of i.i.d. random variables, over the interval $[0, D]$, to the $x$ and $y$ coordinates of each of the anchor point positions in $C$.

After perturbing the anchor points for the springs in this manner, what is the probability distribution for the "body" of the spider $(x_p, y_p)$, i.e. the position of the point-like particle joining the "A"-labeled ends of the $N$ springs in the system? How do we choose the set of anchor positions, $C$, for the $N$ springs to minimize the difference in position for $(x_p, y_p)$ before and after the perturbation of the anchor points, and does this strictly decrease with larger $N$?

Pushing my luck, let's also say that the body of the spider is not a point, but an arbitrarily small circle with a direction vector originally pointing at the position on the contour of the circle half-way between spring $s_N$ and spring $s_1$. Given that the distance between the "A" ends of the springs along the circle's contour are always fixed, what is the angular distribution for the orientation of this vector after anchor point perturbation?

Update - I realize I'm being vague about the distribution of the anchor point positions. The idea was to not discourage simplifications by others that allow for easier analysis (like the anchor points originally being the vertices of a rectangular lattice), but let's imagine that the plane the spider sits on is covered with random points at a density of $P$ points per unit area. The anchor points can thus be a set of points within a range of distances $[B_1, B_2]$ from the body of the spider. Again, I would certainly be amenable to any original lattice configuration of the anchor points.

Update 2 - We can probably also require the further restriction that the "body" of the spider, i.e. the point $(x_p, y_p)$, falls within a convex hull defined by the anchor points in the set $C$. I think, though I'm not sure, that this guarantees a unique equilibrium solution for the position of the spider as a function of the lengths of the springs...

Not an answer, just an illustration.

Perhaps this is one version of what you have in mind? Here I have five feet wandering 10 steps, while the equilibrium position (red) wanders at a reduced scale, essentially $\frac{1}{5}$ the feet displacements: 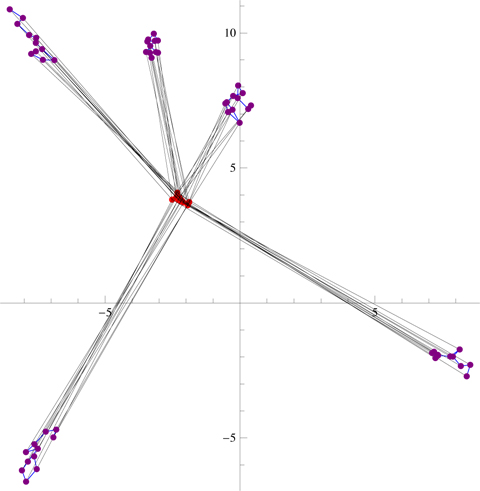 Here are some responses to the comments questions of CKura. For the spider's body, I chose to use the point $c$ whose sum of vectors to the feet $p_i$ balances: $\sum_i (p_i - c) = 0$. Thus, $c$ is the centroid of the feet, $c=\frac{1}{n} \sum_i p_i$. Therefore, the statistics of the random walk for $c$ are just $\frac{1}{n}$-th of those for the feet. Symmetric arrangement of the legs is irrelevant in this formulation.

Above, each of the five feet moved uniformly randomly within $\pm \frac{1}{2}$ at each step. Below the three feet move within $\pm 1$. (The start position of each foot is marked in yellow.) 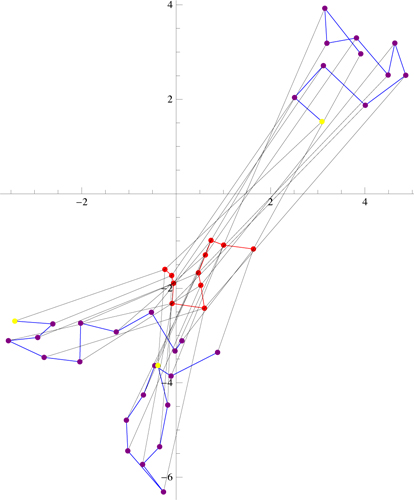 I emphasize that I am not necessarily addressing your exact questions, but rather riffing on your theme.

Not the answer you're looking for? Browse other questions tagged geometry pr.probability or ask your own question.

2
The consequence of overlap sharing for the length-distribution of rods randomly placed on a line
38
When should we expect Tracy-Widom?
1
Asymptotically independent increments random elements: Billingsley Ch:$4$
3
Three-dimensional Apollonian spirals
1
Are interarrival times of doubly-stochastic Poisson I.I.D.?
7
Feynman-Kac formula for the GFF
Question feed