Is it a known example of adic transformation ? (1)

This graph should (I do not master this topic) define a Vershik adic transformation $T$ on its path space.

EDIT 26/08/2012: I finally don't understand why $T$ is isomorphic to the dyadic odometer, as claimed in RW's answer below. Below are some observations about this graph. 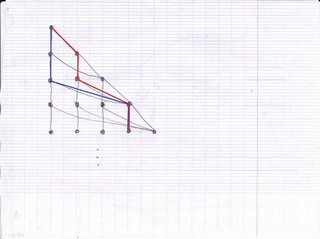 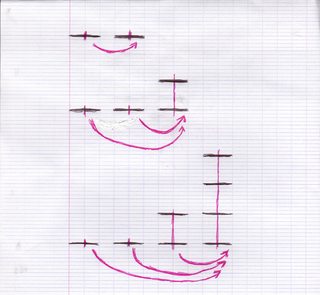 Is there something wrong in my understanding ? Could you elaborate a little the isomorphism between $T$ and the dyadic odometer ? Perhaps I could convince myself that the cutting and stacking construction asymptotically coincides with the odometer, but I don't see the isomorphism between the paths space of this adic graph and the paths space of the usual adic graph of the odometer.

EDIT (later): I have checked that the cut-and-stack procedure is indeed an approximation of the dyadic odometer. Hence RW is right but still I don't see the isomorphism between the paths space.

There are two edges going out of every vertex of this graph; label the vertical one with 0, and the other one with 1. Thus, paths in your graph can be parametrized by the space of 0,1 sequences. If one removes the vertical path corresponding to the sequence (0,0,0,...), then the tail equivalence relation and the lexicographic order on its classes for the punctured path space coincide with the corresponding objects for the punctured space of sequences. Thus, your transformation in precisely the classical 2-adic shift with all due consequences.

Let me make some trivial remarks about your question. I suppose you are looking for an automorphism of a measure space that is isomorphic to the transformation $T$ defined by the above Bratteli diagram ($T$ is the so called Bratteli-Vershik transformation that acts on the path space $X$ of this diagram). Staying in the context of measurable dynamics, you should clearly define a measure $\mu$ invariant (or quasi-invariant) with respect to $T$. In other words, $T$ must be considered on the support of $\mu$ what is not necessary the whole space $X$. Another thing is that $\mu$ could be non-unique. The concept of isomorphism in measurable dynamics is actually $\rm{mod}\ 0$ isomorphism so that you can ignore sets of measure zero.

Not the answer you're looking for? Browse other questions tagged ergodic-theory ds.dynamical-systems or ask your own question.