I remember reading somewhere that there are just a few contributions to knot theory which do not involve knot diagrams. Hence my question:

Does anybody know about papers concerning knot theory which work directly with knots in 3D, without using planar (projections, for example) diagrams?

Here is an example close to my heart. We show that the second coefficient of the Conway polynomial can be defined by counting quadrisecants. (Collinearities of $4$ points on the knot.) 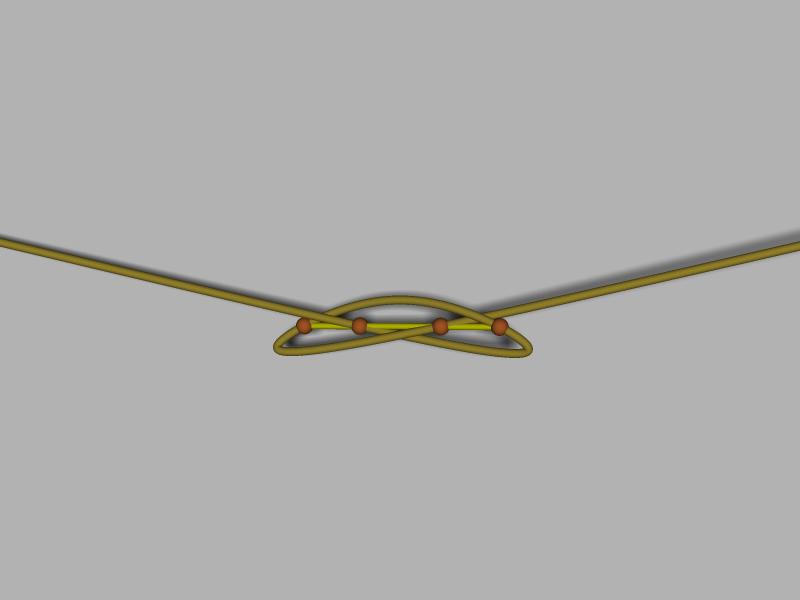 Indeed, much of classical knot theory is done without resorting to planar diagram calculus. For example, the Alexander polynomial can be calculated from a Seifert surface for a knot, and most properties of the Alexander polynomial are best proved without trying to resort to diagrams (there are exceptions). Like Daniel Moskovich alludes to, the Alexander polynomial of a slice knot factorizes as $f(t)f(t^{-1})$, and the proof does not have anything to do with diagrams. More modern developments are also often diagram-free. Ozsvath and Szabo's Heegard-Floer homology was originally developed without diagrams. Only later was it figured out how to interpret the theory using planar diagrams, which was regarded as a good thing, since it made the problem of calculating it algorithmic, although incredibly computationally intensive.

Knot theory was fundamentally connected to 3-manifold theory (making planar diagrams relatively peripheral) by Schubert, in his pair of papers, where he proved the prime factorization of knots and then realized the proofs could all be re-done in the language of incompressible tori in the knot complement. This was later extended to a classification of knots by Waldhausen, although his classification wasn't very easy to use. But these tools evolved into what is called "Geometrization" and now there's a relatively practical classification of knots via these techniques: To every knot there is an associated rooted tree, where the vertices are decorated by various links in $S^3$ whose complements have the geometry of hyperbolic 3-space $H^3$ or the fibred geometry $H^2 \times \mathbb R$. In practice this is a very usable classification for small knots, since the software SnapPea can quickly find the hyperbolic structures on small knots (when the structure exists).

More recently, the computer software Regina computes the Alexander polynomials of knots (and any 3-manifold whose 1st Betti number is one) directly from a triangulation. In the case of knots, it's the triangulation of the complement that Regina uses. Regina has no knowledge of a planar diagram of the knot. One advantage of this is Regina computes the entire Alexander module, so it can also compute things like Milnor signatures and Tristram-Levine invariants. Whenever Regina 5.0 comes out it will also be able to compute things like signatures of 4-manifolds, also directly from triangulations. Regina is slowly building-up all the tools to be able to perform the "geometrization classification of knots", and hopefully it will be fairly quick for all knots with say less than 100 crossings in the not too distant future.

I would argue that most of knot theory has no need for a knot diagram.

Anything that generalizes to $n$--knots can and will have no dependence on Reidemeister's Theorem; as will anything that generalizes to $3$--manifolds... and these two classes together surely cover most of knot theory however one measures it. The only place that knot diagrams seem important, I think, is in Quantum Topology, where one works with Skein relations, but even there, as Qiaochu's answer indicates (indeed also in Vassiliev's original approach), there are significant aspects of the story which are independent of the existence of knot diagrams.

As far as quantum invariants, there is Witten's Quantum Field Theory and the Jones Polynomial, which gives a 3-dimensional definition of the Jones polynomial (usually defined, as you say, using 2-dimensional diagrams) at a physical level of rigor. I understand that this paper was extremely influential, but I'm not familiar with the details. More recently, Witten's Fivebranes and Knots gives a 5-dimensional definition of Khovanov homology at a physical level of rigor.

Adam McDougall constructs a "diagramless" homology theory that ends up being essentially equivalent to Khovanov homology.

Going back into 19th century, Gauss's definition of linking number was intrinsically 3D.

Not the answer you're looking for? Browse other questions tagged reference-request gt.geometric-topology knot-theory or ask your own question.