A monomer-dimer tiling of a rectangular grid with $r$ rows and $c$ columns satisfies the \emph{tatami} condition if no four tiles meet at any point. (or you can think of it as the removal of a matching from a grid graph that breaks all $4$-cycles).

This simple restriction, brought to my attention by Don Knuth in Vol 4 of TAOCP, became my PhD thesis topic, when my research group and I discovered that it imposes a aesthetically pleasing structure with a nice description, and opened up lots of fun questions.

Here is my favourite example, which has all of the possible "features". First it is shown uncoloured

And here it is coloured

The magenta tiles show the types of features it can have, and here they are on their own: 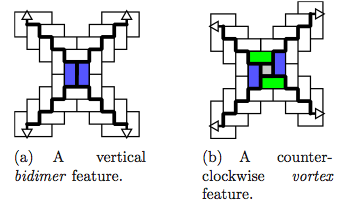 I'll introduce my question here, and then summarize some more results later. I want to find more and better ties between tatami tilings and other less esoteric math problems. If you think of a paper or subject I might want to look into, don't hesitate to answer.

In our first paper, we proved the above structure and showed that:

We posed a couple of complexity questions (which I am working on), for example, is it NP-hard to reconstruct a tatami tiling given its row and column projections? 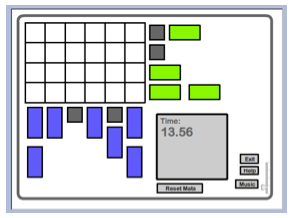 Or tile a given orthogonal region with no monomers? 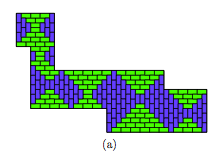 Next we focused on enumerating tilings of the $n\times n$ grid, and found a partition of $n\times n$ tiles with the maximum number of monomers into $n$ parts of size $2^{n-1}$. We also counted the number tilings with $k$ monomers, and this curious consequence:

We also found an algorithm to generate the ones with $n$ monomers, and a Gray code of sorts.

Nice numbers, and a cute problem, but another paper that is self contained with elementary (albeit, somewhat complicated) reasoning. 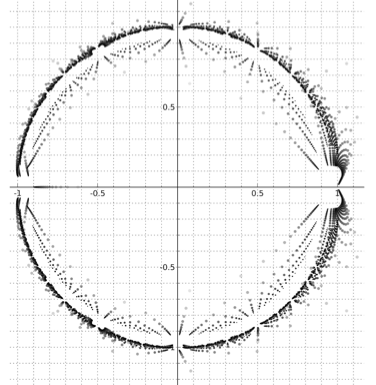 We've found a bunch of neat stuff about it, for example the evaluation of this polynomial at $-1$ is $\binom{2n}{n}$, for $2(n+1)\times 2(n+1)$ tilings, and we found our generating polynomial gives an algorithm to generate the tilings in constant amortized time. Here is some output of the implementation: 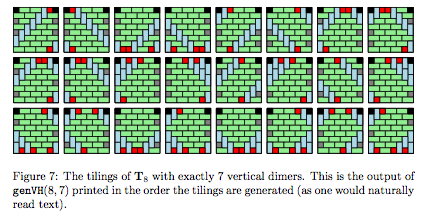 That's the most of the published (and almost published) story. There is a loose connection with other monomer-dimer problems, and things I can look into, like Aztec tatami tilings, but I'm looking for direct applications of other results to these, or vice versa, especially with this last paper in preparation. I'm not asking you to do research for me, but just your thoughts as they are now, so I can go learn new stuff.

Feel free to comment about what you think is interesting, or not, about tatami tilings too!

Tilings in relation to undecidability has been on MO before, (see Wang tiles). Perhaps, if you look at unbounded regions, can some questions about tileability be undecidable?

Not the answer you're looking for? Browse other questions tagged co.combinatorics graph-theory discrete-geometry generating-functions tiling or ask your own question.