Curves of constant curvature on an ellipsoid

It is not difficult to see that the curves of constant geodesic curvature on a geometric sphere are all circles: simple, closed curves that are geometric circles lying in a plane: 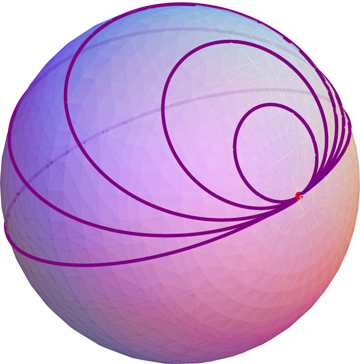 Q. What are the curves of constant (positive) geodesic curvature on an ellipsoid?

Earlier Dmitri Panov asked a more general MO question, "Curves of constant curvature on $S^2$." My question is more specific. I would be interested to know how large is the class of simple (non-self-intersecting), closed, constant-curvature curves on an ellipsoid, whether there are nonsimple closed curves, whether there are infinitely long curves, etc. Dmitri's question revealed that many general questions are open, but perhaps there has been a special study made of the ellipsoid? I have so far not found any literature specifically on this. Thanks for pointers!

Addendum. I've made a few experiments which suggest that simple, closed curves of constant curvature might not be uncommon. My calculations were incorrect---Sorry to mislead!

Further edit. I've now rewritten the calculations, which (I think!) are now correct within numerical accuracy. Here is a portion of a (non-simple) constant-curvature curve on the ellipsoid $\frac{x^2}{2^2}+y^2+z^2=1$: 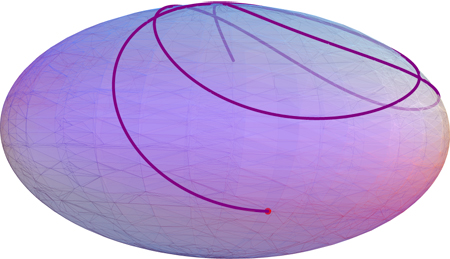 You may want to have a look at the article Foliation by constant mean curvature spheres, by Rugang Ye, Pacific Journal of Mathematics, 147 (1991), 381–396.

In this article, the author shows, given a Riemannian surface $M$, that every nondegenerate critical point $p$ of the Gauss curvature has a punctured neighborhood that is foliated by closed curves of constant geodesic curvature. (Think of the rings of a bulls-eye centered on $p$.)

On the other hand, it was asserted (without explicit proof) by Darboux (see Livre VI, Chapitre VII, Paragraph 622, footnote 1 of his Leçons sur la Théorie Générale des Surfaces) that the only surfaces for which all of the curves of constant geodesic curvature are closed are the surfaces of constant Gauss curvature. I don't know where a proof might first have appeared in the literature, but I once asked Victor Guillemin about this, and he produced a proof. In Ye's article quoted above, he shows that, if one has a sequence of closed curves of constant geodesic curvature whose curvatures go to infinity and that converge to a point $p$ in the surface, then $p$ must be a critical point of the Gauss curvature, and this provides an alternative proof of Darboux' claim.

Not the answer you're looking for? Browse other questions tagged mg.metric-geometry dg.differential-geometry reference-request or ask your own question.