As we have known, the Sato-Tate measure for GL(2) turned out to be the half circle measure

which appears in various versions of equi-distribution problems in GL(2).

My question is what the corresponding measure for GL(3) should be.

Firstly we shall note that Hecke eigenvalues in GL(3) can be imaginary. And we have to replace [-2,2] with {$z\in \mathbb{C}:|z|<=3$} the ball of radius 3 in complex plane. I don't know anything further yet.

(2017-11-26 edit by j.c.: earlier versions of this answer consisted of David Hansen's screenshot of the following, with the text "Here is a screenshot of a semi-answer which froze my computer when I hit 'post'":)

Let $\pi=\pi_\infty\otimes\bigotimes'_p\pi_p$ be a unitarily normalized cuspidal automorphic representation of $GL_n(\bf{A}_{\bf Q})$; suppose for simplicity that $\pi$ has trivial central character. The local factor $\pi_p$ (for $p$ outside a finite set $S$) is determined by a matrix $s(\pi_p)\in GL_n(\C)$, which is well-defined up to conjugacy. The generalized Ramanujan conjecture predicts that $s(\pi_p)$ may be chosen as an element of the unitary group $\SU_n$. Suppose this is true, and let $f:\SU_n\rightarrow\C$ be a continuous function which is invariant under conjugation. Here is a generalized Sato-Tate conjecture:

What's the meaning of the vague condition "$\pi$ is not a functorial lift from a smaller group"? Well, let's try to give a plausibility argument for the above conjecture. Let $\Irr_n$ denote the set of irreducible algebraic representations of $\SU_n$; for $\sigma\in\Irr_n$, write $\chi_\sigma$ for its character. In $L^2(\SU_n)$ we have

Changing $g$ to $s(\pi_p)$, summing over $p\leq X$ and switching the order of summation gives

The behavior of the sum $\sum_{p\leq X}\chi_\sigma(s(\pi_p))$ is ontrolled by the Langlands L-function $L(s,\pi,\sigma)$, and in particular this sum is $o(X)$ if the L-function is nonvanishing and without poles in $\mathrm{Re}(s)\geq 1$. The truth of this latter property for all $\sigma$ is expected to be equivalent to $\pi$ not arising via functoriality from a smaller group.

Based on the comments I'm going to assume that the measure you're interested in is the pushforward of Haar measure to the conjugacy classes of $\text{SU}(3)$ (I know nothing about why you should expect this). There are a lot of things you can say about this measure without writing down an explicit formula for it. In particular, you can compute the moments of various random variables with respect to this measure.

For example, suppose you're interested in the moments of twice the real part of the trace of a random element of $\text{SU}(3)$. This is the character of the representation $W = V \oplus V^{\ast}$ where $V$ is the defining representation. The $n^{th}$ moment is then precisely the dimension of the invariant subspace of $W^{\otimes n}$, and to compute this it suffices to count the number of walks of length $n$ in a Weyl chamber from the origin to itself by highest weight theory. The first few moments are $$1, 0, 2, 2, 12, 30, 130, ....$$

This is A151366 in the OEIS. There is a generating function given there but it involves hypergeometric functions, so like Marty I don't expect a particularly nice explicit formula for the corresponding measure.

(Doing the above for $\text{SU}(2)$ you reduce the problem to computing the moments of a single random variable, the trace. The corresponding representation is just the defining representation, the Weyl chamber is $\mathbb{Z}_{\ge 0}$, and walks of length $n$ in the Weyl chamber from the origin to itself are counted by Catalan numbers, which are the moments of the Sato-Tate measure.)

hence that $\text{tr}(g) = \lambda_1 + \lambda_2 + \lambda_3$ determines the characteristic polynomial of $g$, hence its conjugacy class. So to understand the pushforward of Haar measure to the conjugacy classes of $\text{SU}(3)$ it suffices to understand the joint moments of the real and imaginary parts of the trace. For example, the moments of twice the imaginary part are (up to sign) the dimensions of the invariant subspaces of tensor powers of the virtual representation $V \ominus V^{\ast}$ and so one must count walks in a Weyl chamber with certain weights $\pm 1$. The first few moments are $$1, 0, 2, 0, 12, 0, 98, ...$$

and this sequence does not appear to be in the OEIS.

I can give a closed formula for the pushforward of $SU(3)$ Haar measure under trace. I don't understand the number theoretic issues well enough to know whether I want $SU(3)$ or $U(3)$, though. 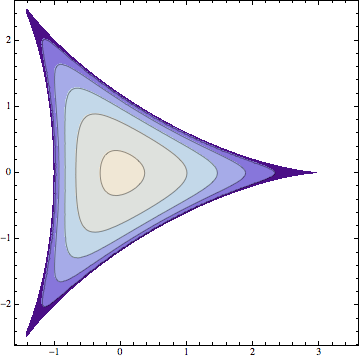 In principal, one should be able to carry out this computation carefully enough to get the constant, but I'm not going to do it.

Conceptually, this computation is similar to the classical computation that the map sending $(\alpha_1, \ldots, \alpha_r)$ to the coefficients of the polynomial $\prod (z-\alpha_i)$ has Jacobian $\prod_{i<j} (\alpha_i - \alpha_j)$. However, because of the constraint that the eigenvalues have product $1$, the details don't quite match.