When I was a teenager, I was given the book Men of Mathematics by E. T. Bell, and I rather enjoyed it. I know that this book has been criticized for various reasons and I might even agree with some of the criticism, but let's not digress onto that. E. T. Bell made a reasonable list of 34 of the greatest mathematicians from the ancient Greek period to the end of the 19th century. His list isn't perfect — maybe he should have included Klein or skipped Poncelet — but no such list can be perfect anyway. I think that his selection was good. He also made the careers of these mathematicians exciting and he addressed why mathematicians care about them today. It helped me learn what achievements and topics in mathematics are important.

(Just to head off discussion, the standard complaints include that the title is sexist and so is the book, that Bell was loose with biographical facts, and that he "chewed the scenery".)

After the period covered by Bell, there is a 50-70 year gap, followed by the the Fields Medals. The list of Fields Medalists has its own limitations, but it is another interesting, comparably long list of great mathematicians. Somewhat accidentally, this list also orients and motivates advanced mathematics students today.

But who are the great mathematicians in the gap itself, that is, those born between 1850 and 1900, or say between 1860 and 1910? (Or 1920 at the latest; that is what I had before.) There is a good expanded list of mathematicians with biographies at the St. Andrews site. However, it is too long to work as a sequel to Bell's book. (Not that I plan to write one; I'm just asking.) If you were to make a list of 20 to 50 great mathematicians in this period, how would you do it or who would they be? Presumably it would include Hilbert, but who else? (Poincaré was born in 1854 and is the latest born in Bell's list.)

For example, I know that there was the IBM poster "Men of Modern Mathematics" that also earned some criticism. But I don't remember who was listed, and my recollection is that the 1850-1900 period was somewhat cramped.

I decided based on the earliest responses to convert this list to community wiki. But I am not just asking people to throw out names one by one and then vote them up. If a good reference for this question already exists, or if there is some kind of science to make a list, then that would be ideal. If you would like to post a full list, great. If you would like to list one person who surely should be included and hasn't yet been mentioned, then that's also reasonable. It may be better to add years of birth and death in parentheses, for instance "Hilbert (1862-1943)".

Note: To make lists, you should either add two spaces to the end of each line, or " - " (space dash space) to the beginning of each line.

The St. Andrews site is an invaluable resource. From that list, I picked (usually) at most one great mathematician born in each year from 1860 to 1910:

Nothing very scientific, I'm afraid, but I do have my favourites from this period. Of course, Hilbert, but in addition: Élie Cartan, Emmy Noether, Hermann Weyl, Paul Dirac (if one is allowed to consider him a mathematician), Kurt Gödel, André Weil, Israel Gelfand, Laurent Schwartz. And I'm sure that I'm leaving many in the inkwell, so to speak.

A more scientific approach -- I'm fully aware of its pitfalls! -- is that given our propensity for naming things after people, one could draw a list by counting attributions using the Encyclopaedia of Mathematics or the Princeton Companion as corpus.

OK, this time $\epsilon$ more scientifically. I took The Princeton Companion to Mathematics (don't ask), converted the PDF to text, analysed the word frequency and isolated the names mentioned among the answers thus far. I then fed the results to Wordle and obtained the following amusing name cloud: 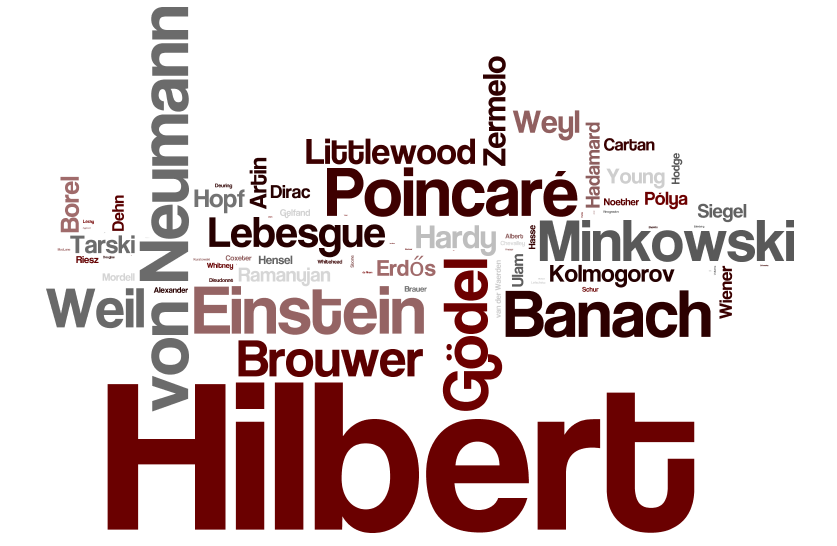 I've also made available a larger PDF version of the image. Needless to say, one has to take this with a grain of salt. It's a first approximation. For example, no effort has been made to distinguish between Cartans, Artins, 'von Neumann' actually denotes the appearances of 'Neumann'. Not to mention the fact that as Greg points out in a comment below, it is heavily biased in favour of those mathematicians after whom we name things. But I take it we are aware that any such lists are bound to have an element of bias and subjectivity.

As found by Gjergji, a list compiled by James Dow Allen (except for a later Fields Medalist tacked on at the end):

This is already not bad. Maybe people can offer improved versions of this starting point. (I personally would both add and subtract from this list.)

Motivated by an e-mail from grshutt, I looked myself at the Princeton Companion to Mathematics. I discovered that the editors of the PCM answered the same question as the one that I posed here. Part VI is a collection of biographies of 95 mathematicians, plus one for Bourbaki, and the fact that the Bernoullis share a slot. They chose 37 mathematicians born between 1850 and 1920, exactly in the middle of the range that I suggested. See the table contents to see who they picked. They also wrote nice biographies, although they are much shorter and more sedate than E.T. Bell's single-author work.

It is a little embarrassing that we had this whole discussion without noticing that the PCM, with Timothy Gowers as the chief editor, had already done the same work. But it is also useful. It seems that when informed people carefully make lists of influential mathematicians of comparable length, they'll arrive at roughly the same list. Typically the intersection is about 1/2 if the lists are exactly the same length. PCM's list is longer than Bell (in the corresponding period) and mine, and shorter than Pete's, so we can look at who I (or Harrison) included but they did not, or who they included but Pete did not.

Some of the differences can be explained as a somewhat different emphasis. In listing Russell and Church, the PCM gave more credit to the philosophical end of logic. (This is also grshutt's point in in his answer posted here and in his letter.) Whether Feynman should "count" is another question with two different reasonable answers. (As I said in a comment, the argument for Feynman is that he is an architect of quantum field theory, and quantum field theory is arguably a fundamental mathematical theory, even though parts of it haven't been made rigorous.)

And I suppose that some of the differences indicate the ill-defined side of the question, or they are just random fluctuations, and aren't really worth arguing over.

I feel some of the Russian/Soviet mathematicians are missing in the lists, like:

though I think one could include many others.

This did not fit in a comment. By popular (or at least Kevin Lin's) request, I took some photos of the IBM Mathematicians Poster on the 5th floor of the James Clerk Maxwell Building of the University of Edinburgh, just in front of the Common Room of the School of Mathematics. (My usual place of work.)

Their choice of 23 mathematicians are as follows, where I have italicised the ones who were added after the production of the poster:

For the sake of metahistorical accuracy (and for fun), what would a distillation of Pete's excellent list (and perhaps Greg's bookends, plus the stragglers in the 1840s) to a shortlist of 15 or 20 look like? This would better match the "density" of mathematicians in the later part of the era Bell covers, after all.

My humble proposal (not including Cantor, Kovalevskaya, and Poincaré, who are in Bell already):

That's 20, counting Elie and Henri Cartan as one a la the Bernoullis. In attempted keeping with the flavor of the original, I gave special consideration to mathematicians whose life could be "romanticized" to some degree, hence the inclusion of von Neumann, Turing and especially Feynman.

Thoughts? Keep in mind that I'm trying for "original flavor," so look at biographical considerations as well as mathematical, and play nice.

To extend Pete Clark's very nice work, I imitated his methods for the decades before and after the period that he covered. It is exhausting to keep making one decision after another, and I didn't bother separating people into main list and honorable mention. Maybe Pete or someone else can help with the latter — feel free to edit this answer!

It's clearly time to stop around 1920, not just because of the Fields Medal, but also because more and more mathematicians born after then are still alive. Also, I understand that Feynman is a debatable choice as a mathematician, but I think that he should at least be considered.

I was going to request an answer like Harrison's, then I was going to post an answer like Harrison's, but Harrison scooped me. So by a happy accident, we have two independent lists of 20 people. My list has a slightly narrower time frame. I agree about Lie and Klein, but arguably they should have been in E. T. Bell's book rather than in the list compiled here. I concede that I also see Harrison's argument to include them here (if you also don't skip Cantor, Kovalevskaya, and Poincaré). Also, I respect Harrison's point about including people whose lives can be romanticized, and I even agree that a biography should try to romanticize the lives of mathematicians, but I think that the math should come first in deciding who to write about. (Besides, Erdős, Feynman, and Turing have already provided enough human interest for biographers.)

Anyway, here is my list. (I cheated in just one spot; I replaced one of mine by Kolmogorov.)

Are there other things to say about the symmetric difference, (Harrison's list) ∆ (my list)? We intersect in 11 people; should our lists be made to converge? Are there fundamental mathematicians who we both missed?

Two names haven't been mentioned yet:

While Whitehead and Russell were not principally mathematicians, each published works in the field prior to their collaboration on Principia Mathematica (1910 - 1913; 1927); e.g.,

Russell, An Essay on the Foundations of Geometry (1897) and Principles of Mathematics (1903), and Whitehead, A Treatise on Universal Algebra with Applications (1898).

18
The only great book that Bourbaki ever wrote?
91
Pseudonyms of famous mathematicians
51
Why might André Weil have named Carl Ludwig Siegel the greatest mathematician of the 20th century?
3
Lapses of "the early proponents of the doctrine of limits"
34
Understanding a quip from Gian-Carlo Rota
34
Open problems from antiquity solved with analytic geometry
20
Which great mathematicians were also historians of mathematics?
21
The first female algebraist in US/Britain?
55
Books/websites which have motivating stories of mathematicians overcoming hardships in life
Question feed