I am looking for mathematical documentaries, both technical and non-technical. They should be "interesting" in that they present either actual mathematics, mathematicians or history of mathematics. I am in charge of nourishing our departmental math library (PUCV) and I would like to add this kind of material in order to attract undergraduates toward mathematics. For this reason, I am not looking for videos of conferences or seminar talks, but rather for introductory or "wide public" material.

Here are some good examples.

Are there more examples? Thanks, Ricardo.

Leys, Ghys & Alvarez have also made a video series in a similar style about dynamical systems called "Chaos". The nine chapters are all available under a Creative Commons license.

$N$ Is a Number: A Portrait of Paul Erdős. (Official site; Wikipedia link) 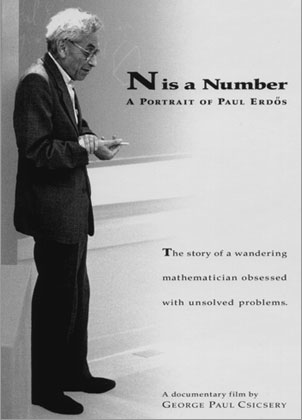 I really like this short documentary on Fermats Last Theorem and Andrew Wiles struggle and setbacks proving it.

"The Color of Math" (Wayback Machine) is a rather poetic documentary by Katia Eremenko that will have its premiere at the Moscow Film Festival (Wayback Machine) this upcoming Saturday, June 23, 2012. It features Cedric Villani, Anatoly Fomenko, Maxim Kontsevic, Jean-Michel Bismut, Aaditya V. Rangan (and myself). 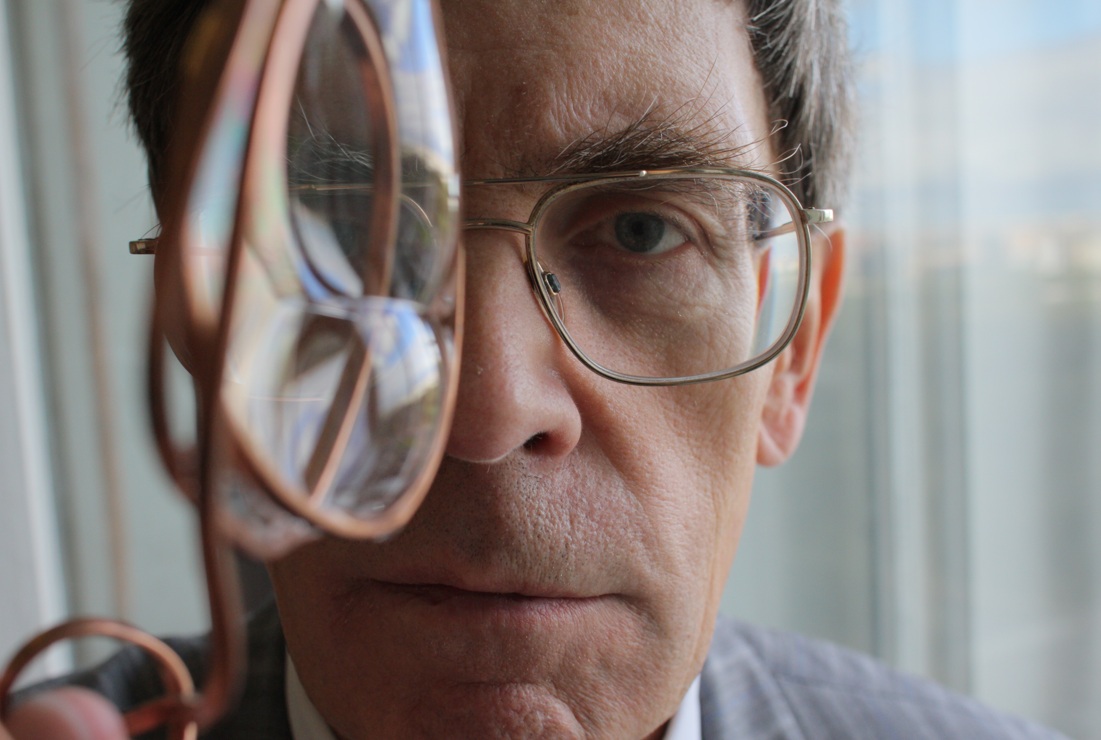 Something completely different, but I'm sure a lot of people here at MO would enjoy:

Hard problems American documentary about the same event with focus on the US team.

Documentaries contain analysis of that year's problems (although the focus is on the competition in general, team selection and contestants - which makes it more interesting to ex-contestants than to professional mathematicians or math enthusiasts).

The soundtrack is still in progress, so it's not yet fully available but Ester Dalvit made a very interesting movie about braids and knots. At the end it will be distributed under a Creative commons license.

A trailer and parts of the movie are available here. Up to now three (old versions of) chapters are available, explaining respectively through computer generated animations:

Here the synopsis from IMDB: "When France surrendered in 1940 and German soldiers showed up in the Vosgian village of Housseras, an unknown French foot soldier burned his papers and killed himself in a farmer's barn. Four years later he was identified as "soldat Doblin, Vincent". In fact, he was none other than the mathematician Wolfgang Doeblin, son of the famous German novelist Alfred Döblin ("Berlin Alexanderplatz") who was forced to flee Nazi Germany with his family in 1933. A French citizen since October 1936, Wolfgang Doeblin carried on his research into probability theory during his military service and even during the hardships of the "Phoney War" in the winter of 1939-40. In February 1940, four months before his death at the age of 25, he sent his most important manuscripts ("About the Kolmogoroff Equation") as a "sealed envelope" to the Academy of Science in Paris, where they were kept in safe custody for 60 years. Wolfgang Doeblin's short and dramatic life story, almost forgotten, was finally brought into the limelight when the "sealed envelope" was opened in May 2000. Far ahead of their time, his groundbreaking contributions to the theory of random processes place Wolfgang Doeblin among the major innovators of probability, the "mathematics of randomness". Mathematical models for evaluation of chances and risks went on to gain major importance in numerous domains of modern science, in everyday life and especially in contemporary financial mathematics."

"Taking the long view: The life of Shiing-Shen Chern"

This very nice documentary was produced recently on the occasion of the Chern Centennial Conference.

Marcus du Sautoy's The Story of Maths is a total of four hours attempting to give an overview of the history of mathematics from ancient to modern time, spending 5-10 minutes each on the life and work of some of the most famous mathematicians. While one could quibble with some of the selections, the project is overall a fantastic production.

The code-breaking work at Bletchley Park, which helped save Britain from Nazi Germany, qualifies as one of the greatest stories of World War II, and the misunderstood genius, Alan Turing, stands at the center of this tale. Perhaps no one understands Turing's role during this period -- and his larger impact on mathematics and computing -- like B. Jack Copeland. In this lecture, Copeland contends that Turing should be celebrated as the father of artificial intelligence.

Though this one is more about mathematicians, than mathematics.

In this one-off documentary, David Malone looks at four brilliant mathematicians – Georg Cantor, Ludwig Boltzmann, Kurt Gödel and Alan Turing – whose genius has profoundly affected us, but which tragically drove them insane and eventually led to them all committing suicide.

Science Lives, made by the Simons Foundation, has nine very long interviews that essentially amount to miniature documentaries about the lives of a number of 20th/21st century mathematicians and physicists.

PBS documentary A Brilliant Madness that looks at the life of Nobel-prize winning mathematician, John Nash

A short recent documentary on the life and mathematics of Évariste Galois, produced by the CNRS :

This documentary can be viewed online here :

I vote for 100年の難問はなぜ解けたのか ～天才数学者 失踪の謎 ("Why the difficult 100-year-old conjecture was proven- The mysterious disappearance of the genius mathematician"), about Grigory Perelman, Geometrization, and the proof of the Poincaré Conjecture, as the best mathematical documentary ever. It's non-technical, but it's really very well-made, and gives a good sense of what research mathematics is like, and why some people spend their lives searching for proofs of mathematical conjectures. The mathematics in it is mostly fairly solid. It inspired fashion design house Issey Miyake to design a fashion collection with Bill Thurston inspired by geometrization.

The secret life of chaos. A BBC documentary.

"Achever l'inachevable" or "Achieving the Unachievable" features many mathematicians discussing M.C. Escher's Print Gallery, most of the material coming from the Notices article here.

There is a new movie that just came out called Comment j'ai détesté les Maths (How I hated math). Cédric Villani, Jim Simons, and others are featured in the film.

The only documentary about Grigori Perelman has recently got English subtitles. (Perelman is the guy who proved the Poincare conjecture and then refused a million dollar prize.) It is for laymen, and very dramatic.

The Geometry Center (formerly of UMN, now apparently defunct) many years ago produced "Not Knot" (about hyperbolic space) and "Outside In" (about sphere eversion). There is apparently a more recent third one "The Shape of Space" I'm not familiar with. Apparently you can still order them here, although copies are now easily found on YouTube.

THE THINGS YOU DON'T UNDERSTAND, 2010, Peter and Petra Lataster Mathematician Hendrik Lenstra has no car, no computer and no television. But he is the proud owner of numerous editions of Homer’s Odyssey. Directors Petra & Peter Lataster draw a portrait of Lenstra, a mathematician who thinks on the highest level. And also in daily life he is not interested in the superfluous and the fashionable. http://www.latasterfilms.nl/en/films/the-things-you-dont-understand/

A very nice interview of László Lovász can be found here: https://www.simonsfoundation.org/science_lives_video/laszlo-lovasz/ A very wide variety of topics are covered (see the 'playlist' at the right hand side)! 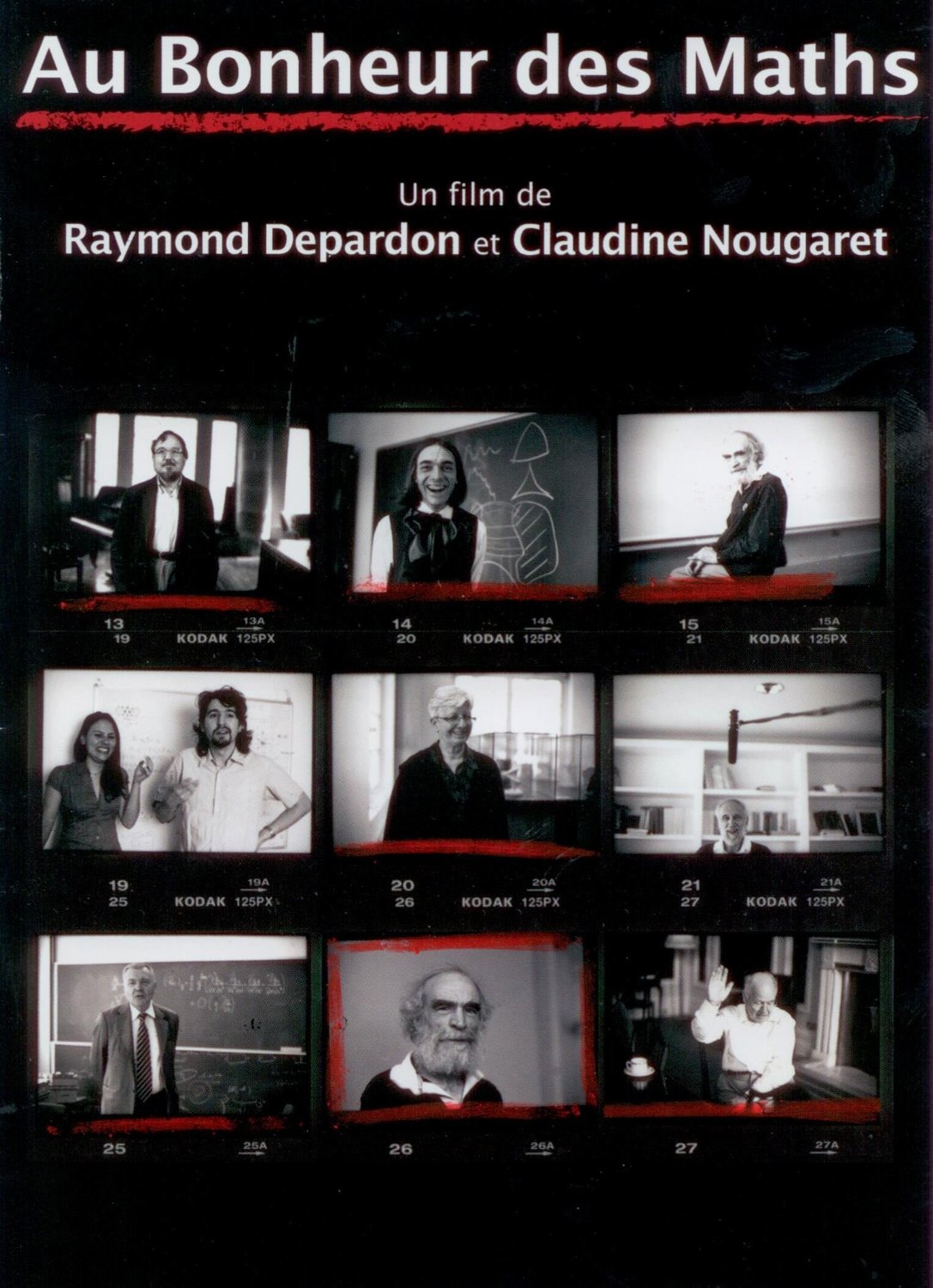 A new documentary about Ramanujan just screened at the AMS meeting earlier this evening. It's called, The Genius of Srinivasa Ramanujan. It was claimed that it's already up on YouTube.

EDIT: All I was able to find on the web was a very short preview.

Sorry it is in Russian.

My friend watched this in University of Waterloo: BBC: Code Breakers Bletchley Parks lost Heroes
This is not about the Enigma Machine, which is probably the more well known example in code breaking. Instead, this is about the Lorenz cipher.
This is a relatively new movie (october 2011) that talked about how a maths student and an engineer combined to hack into Hitler's personal super-code machine, named the secret writer, and helped win WWII. Also of historical significance, the movie described the decryption machine as the first programmable computer.

This documentary on John Von Neumann produced by the MAA in 1966 is pretty good. Has interviews with Paul Halmos, Stanislaw Ulam, Eugene Wigner, among others.

Share
Improve this answer
answered Jul 2 '14 at 11:55
community wiki
quachelsey
$\endgroup$
Add a comment  |
1
2 3 Next
Highly active question. Earn 10 reputation (not counting the association bonus) in order to answer this question. The reputation requirement helps protect this question from spam and non-answer activity.